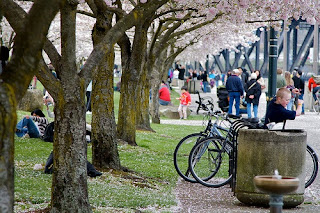 Having the two cars let us all go to Quinn's T-ball practice. Dane was able to take off from there for his class.

It was a very different experience to have the car being on my own with the boys. It let me be more spontaneous. I don't know if that's the right word, I actually feel more spontaneous / less tied down when I don't have a car. But, it allowed us to be less planful.

We were able to go right from T-ball to the wilderness camp open house (which we wouldn't have been able to do if I didn't have the car). Reed started to meltdown at the open house so we were able to leave right then and there (another benefit of the car is having it when there are meltdowns).

After the weekend, there was the matter of the lost bus-pass. Luckily, as we live in Portland, some nice person found it at the bus-stop, went through the trouble of looking me up in the PSU directory (since the bus-pass is on my PSU ID and let me know she had it). So Dane picked it up for me and I got it - and then proceeded to lose it in the house somewhere.

So last week I drove the car to work. I called it an experiment - seeing what it was like with the car again after having time away from it. And, yes, it did help that it was cold and wet and hailing and raining and snowing and miserable all week.

So what did I learn having the car? It lets me be lazier. I can run late and still get there in time if I take the car. If I'm running late and I'm taking the bus, I'm held accountable. For some strange reason, I like that. Also, I don't think about where I'm going or what I'm doing, I just do it. For some reason, I don't really like that either. I like the purposefulness of knowing how I'm going to get somewhere. It proves to me that it's worth going to.

But it also made me realize, that without the car, all the responsibility for the kids goes to Dane. Even if I'm helping getting them ready / get them out the door, he's stuck with picking them up. When I had the car, he could go to the gym and I would be the one to pick up the kids. I could offer. Now if I pick up the kids on the bus, I have to know ahead of time so I can plan for it. So me being carless puts a lot of pressure on Dane. He's been fine with it, but he didn't really sign up for it, just got stuck with it, so I don't feel so great about that. He's supportive, but to a point.

One of Dane's best talents is his ability to find things that I lose and on Friday he found my lost ID / bus-pass (that was in the backpack I looked through twice), so now I'm back on the lightrail track and off the wagon. And just in time, it's cherry blossom season and the path to carlessness is lined with cherry blossoms. Last year, I started riding my bike to work a week too late - all the cherry blossoms along waterfront park has dropped their flowers. It's only a few weeks that we have this time, and this time I'm not going to miss it.
Posted by Text at 11:02 AM